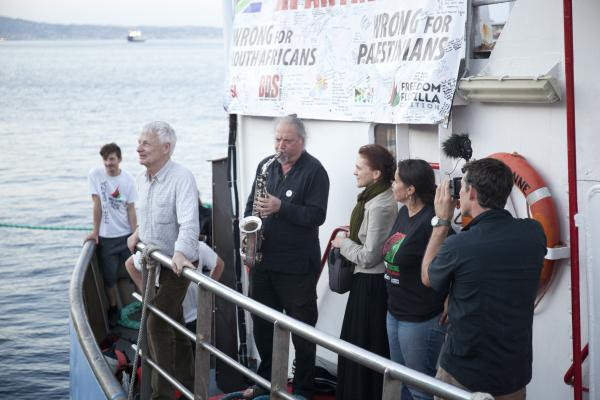 Israel has not only taken over the sky, borders and Palestinian territorial waters, but has also extended its blockade in the Mediterranean Sea up to 100 nautical miles, violating international and maritime law.

During the operation of hijacking  “Marianne” Israeli soldiers used violence, threats  and abuse against crew and passengers. The IDF referred to the operation as “uneventful” which can only be understood in the light of the levels of violence used in general in the upholding of the blockade and particularily in the routine hijacking of Palestinian fishing vessels.

As always, the Freedom Flotilla sails to end the blockade of the Gaza Strip. This year Freedom Flotilla III applied a slightly different strategy than previous missions. The Flotilla consisted of four ships, one of which would sail towards Gaza and three more to accompany it to a certain safe point and then return back to their ports of origin. Two more ships were being prepared to sail together with the “Marianne” and carry more sailors.  They didn’t make it, however, due to technical issues that are currently being investigated. Their sailors, unfortunately, had to stay on shore, but their message of solidarity travelled with the rest of the Flotilla to the Palestinian people.

The morning of June 29th, at 1:06 am, the Israeli army raided the ‘Marianne’, part of the Freedom Flotilla III consisting of four ships. They did so at  night, following the boat  140 miles from Gaza and attacking at a distance of almost 100 nautical miles from Gaza, in international waters. This constitutes a violation of international maritime law. The other three accompanying ships, for the mission named Juliano II, Rachel and Vittorio, carrying 29 sailors, returned safely as planned to their ports of origin.

The 18  sailors on board the “Marianne” – among whom were the Palestinian Member of Knesset Basel Ghattas, the Tunisian ex-president Moncef Marzouki and numerous international journalists – were kidnapped and forcibly taken against their will to the military port of Ashdod, to be later transferred to Givon prison. The passengers of the ‘Marianne’ were deported in small groups between 1st  and 6th July.

We call on governments around the world and to international organizations to restore international legality. Our actions would not be necessary if these institutions acted to ensure the accountability of the Israeli government for war crimes and collective punishment against the population of Gaza. Until they effectively act, the Freedom Flotilla Coalition will continue to  sail to Gaza until Israel complies with the international law and the blockade is lifted.

The legal framework on the principles that drive the civil initiative of the Freedom Flotillas are based on:

1. Resolution 242 of the United Nations General Assembly, in which the Israeli military withdrawal from the Occupied Palestinian Territories is requested, to ensure freedom of navigation and a just solution to the refugees issue.

2. Fourth Geneva Convention, especially its Title III referred to military actions in Occupied Territories, in which the banning of collective punishment of civilians under occupation is stated in Article 33 of Section I (violated due to the blockade, indiscriminate and disproportionate attacks, cutting supplies, maritime traffic blockade and fishing ban in territorial waters, and other illegal activities).

3. United Nations Convention on the Law of the Sea. This document would be applicable to defend the right of a civil vessel navigation in international waters and also prohibiting the actions of violent attacks in international waters as carried out by Israeli military forces on the Mavi Marmara, with the result of nine Turkish citizens and one American killed, the ships approaches and kidnappings of a dozen civilian which have been trying to break the blockade for the past four years.

Freedom Flotilla will be back

Freedom Flotilla Coalition will not stop until the blockade has ended. We would like to thank all sailors who managed to embark on the Flotilla and also those who stayed back. Furthermore, we would like to thank all media representatives who followed our mission. Last but not least, we would like to thank all sailors on shore, the hundreds of volunteers who worked on the ships to get them prepared, all people who welcomed the “Marianne” at its ports of call all around Europe and finally all supporters of Freedom Flotilla who raised their voices against violation of international law through social media all around the world. We will not stop our actions until the blockade is lifted and Gaza’s port is free for people and products to travel all around the world. We only give one promise to the violators of international law: We will be back!